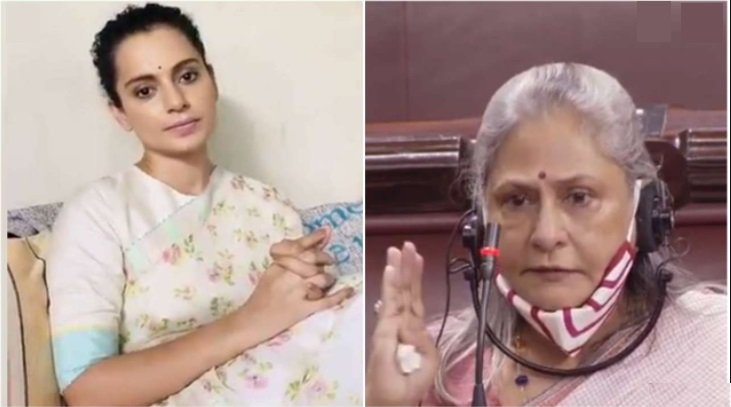 After veteran actress and Samajwadi Party MP Jaya Bachchan in Rajya Sabha today said that a few people are trying to defame the film industry and the government must provide protection against it, Kangana Ranaut retorted with a hard-hitting tweet.

Jaya Bachchan, without taking any names, slammed BJP MP and actor Ravi Kishan for his drugs conspiracy remark in the Lok Sabha on Monday.

“The Government must stand by the entertainment industry because it always comes forward to help the government. They come and speak for them, support them if there is a national calamity, they come forward, give money, give their services. And I think it is very important that the government must support this industry and not kill it just because there are a few people, you can’t tarnish the image of the entire industry. This industry brings international name, and recognition also apart from the political people. I was really embarrassed and ashamed yesterday one of our members in the Loj Sabha, who is from the industry spoke against (I am not taking the name) the film industry. It is a shame ‘jis thali mein khate hai usi me chhed karte hai’, galat baat hai. I need the protection, this industry needs protection and support of the government”, Jaya Bachchan said during the second day of the Monsoon session in Parliament.

Jaya Bachchan also gave a Zero Hour notice in Rajya Sabha over the alleged attempt to defame the film industry.

Ravi Kishan had on Monday said that drug conspiracy is a big issue and has affected Bollywood, urging the government to take strict measures against the culprits. He even said that drugs come to India via China and Pakistan, as part of a larger conspiracy to target the youth of our country.

The drugs conspiracy has once again become the talking point in Bollywood after Rhea Chakraborty, brother Showik and several other names emerged in the Sushant Singh Rajput death case.