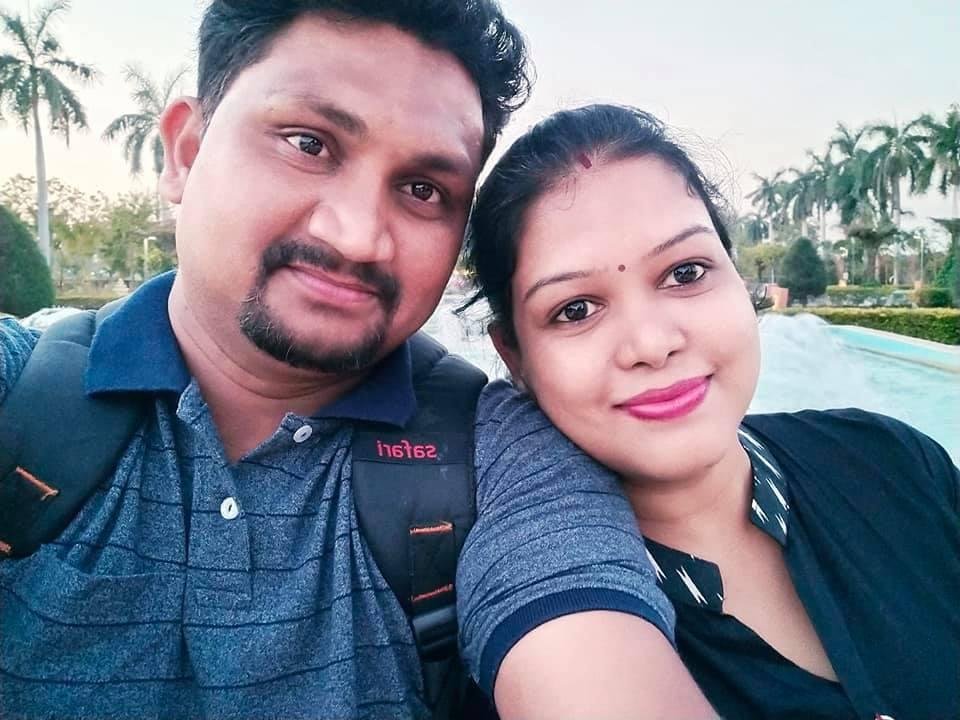 India Wire Network: This is not just another Covid Survival story, but this is story of a movement which connected unknown people with each other .A story where people overcame their odds to accumulate funds for a woman , whom they have never even met in their life. This is a story of how people of Gujarat united for just one agenda to save a mother of 19 month old twin daughters, who had 96% lung damage and almost no chance of survival.

SEEMA YADAV’S MAGICAL RECOVERY AFTER FIGHTING WITH COVID FOR 59 DAYS.

A humanitarian initiative started by a lady transformed into a movement , where people from different class, creed and religion joined with a single string of faith and compassion towards a patient who is an absolute stranger to them even now. But in the journey to save her , they connected with many people without any hesitation with just one agenda Save Seema!

The reunion of Seema with Suresh and their twin daughters at Bhailal Amin Hospital.
We all know how the second wave of Covid has shaken each one of us with the increase in fatality rate, partial lock downs leading to financial insecurity and a continuous ordeal to escape from getting infected by Covid. But there is a silver lining on these dark clouds… These worst times have reignited the humanity and emotional quotient within the people to an extent that irrespective of being strangers, people came forward to help their fellow countryman.

The story about the power of blessings, compassion , faith and commitment , which helped a 37 year old Seema, a mother of twin 19 months toddler to defeat Covid three times in 59 days.

This is actually the story about the power of blessings, compassion , faith and commitment , which helped a 37 year old Seema, a mother of twin 19 months toddler to defeat Covid three times in 59 days. The lady was admitted with just 4% of lung functioning in the second week of May and was revived at Vadodara based Bhailal Amin Hospital . But the journey of Seema from nearly fatal condition to recovery has actually cast light on the fact that how the human values are still alive in the hearts of people and society.

Seema Yadav’s husband Suresh, a driver by profession , was already fighting the financial battle since the first round of Covid, due to major setback in the travel industry. While there was no sigh of relief for the couple, it was the third week of April this year, when Seema started facing acute breathing problems. It was a tough time for Suresh , to find an ICU bed for his wife , and he started seeking help from any and every unknown sources. During this battle for a bed in ICU, Suresh got a number from a random Whatsapp group. He immediately called that number and without even introducing him, he requested, “Can you arrange a ICU bed for my wife?”. The recipient of the call was Pooja Rathore , an ex HR professional. At first she was speechless, as she knew the situation was grim with every small or big hospitals packed to full capacity. But when she came to know that the patient is a mother of 19 months twin daughters and the couple has no family members even to take care of the toddlers, her heart sank and she was shaken from within.

The journey of Seema from nearly fatal condition to recovery has actually cast light on the fact that how the human values are still alive in the hearts of people and society.

Within few minutes, she started the mega search drive for an ICU bed in any and every hospital in Vadodara. Somehow she managed to get one bed at a private hospital located at Vasna road in Vadodara. It was a sigh of relief for Suresh to get an ICU bed , and Seema was at once admitted . But after detailed medical investigations, Suresh was shocked to know that her beloved wife’s lungs were 96% damaged. The case was almost on the verge of final end.

The thought of loosing his wife and the mother of his two kids was traumatic for Suresh , and suddenly he once again called Pooja Rathore , to inform about the Seema’s condition. When she came to know about Seema ‘s condition, she consoled Suresh to not loose hope , when she herself knew that 96% damage is almost the end . She at once connected to Dr. Manish Mittal, a leading physician of Vadodara and requested him to treat Seema. With major complications, the infrastructure of Vasna based hospital was not enough, so the second battle to get an ICU bed started. They could manage an ICU bed at Vadodara’s leading Bhailal Amin Hospital , where Dr. Manish Mittal is engaged as a full time consultant.

Talking to media Dr. Manish Mittal said, “This was one of the most complicated case I have dealt during Pandemic times. She was in critical condition and used to feel drowsy when kept on ventilator. We even did tracheostomy as she was unable to breathe. There was bleeding in her lungs so we couldn’t give her blood thinner too. I have lost a lot in the second wave of Covid but saving this life I fell I have achieved a lot ” During her treatment there were sudden ups and downs in her health conditions. About three times she was extremely critical and after a sudden jolt , she recovered too.

While the doctors were continuously monitoring and treating Seema, Suresh was short of funds , and when Pooja Rathore , randomly called him to know about Seema ‘s condition, he broke down. With her quick problem solving, she turned to the crowd funding as the need of the hour. She met with Dr. Mittal and his team to understand the expenses. The treatment must go on… was the only solution as her faith in Dr. Mittal and Bagh officials went all time high , when she saw how they were passionately treating Seema 24×7 putting their 100%. She at once called her school friends, her relatives and started collecting money for Seema ‘s treatment. In just two days, she gathered 7 lacs, which were directly deposited at Bhailal Amin hospital.

But that was not the end to her battle to save Seema, The sudden jolts in her health were so critical that more funds were needed. Now again she started collecting funds , and appealed every one though social media .

Talking to media Pooja Rathore said, “ Since the first day I had deep faith in Dr. Mittal’s treatment and Bhailal Amin Hospital , and on the basis of the same , I started the crowd funding ,where we collected about 23 lacs for Seema ‘s treatment. The donations range from Rs. 11.00 to 1lacs that i received from various donors. I received funds from Church, Gurudwara, Temple trusts and mosques , which shows how people from different religions came forward to help Seema. I also received funds from my friends , their friends who are settled outside India. “

From maid servants , to auto drivers and pensioners donated whatever they could .
Any thing said about Dr. Manish Mittal would be less when he knew funds were going down he himself started collecting funds so that Seema and Pooja don’t lose this battle the battle of grit determination focus faith trust in him and the hospital not many doctors do this to fight fierce battles like this not even once did dr manish give up hopes just kept working tirelessly focused to make the mother Seema win this battle and the Pooja not let her blind faith trust down “
He personally accumulated 2lacs as donation to save his own patient, while Dr Vikram Chauhan who treated her before she was shifted to Bhailal Amin hospital donated 1 lac for his ex patient treatment.

The reunion of family after Seema was shifted to special room from ICU.
“ Bhailal Amin hospital was extremely ethical and methodical in charging every penny according to Covid norms announced by Government. The entire team of Bhailal Amin hospital including Mrs. Barkha Amin, the trustee of the hospital, were so compassionate and full of empathy at every step of the battle, be it expenses, line of treatment or overall care of Seema. The front line warriors and team of doctors were on their toes to revive her, which actually turned out to be a miracle with Seema’s almost 90% revival and can eat by herself , added Pooja Rathore.

It was a heart touching moment , when Seema was shifted out of ICU and her husband with their twin toddlers went to visit her . Tears rolled out from the eyes of staff members of the hospital witnessing the warm reunion of the family , which was the dawn of Seema’s victory against Covid. During this journey Pooja also received many suggestions to shift Seema at Government hospital, but her faith in Bhailal Amin and consulting team of Doctors leaded by Dr. Manish Mittal helped her to stick to her decision of continuing treatment at Bhailal Am’in ‘Hospital.

Talking to media , Suresh Yadav , the husband of Seema said, “These have been the most difficult days of my life as my wife was struggling for life with 96% lungs damage. I thought I lost her when her oxygen levels kept dipping , but due to the efforts of doctors , and blessings of donors , Seema is now recovering well, and I am hopeful , that she will be discharged soon. Currently she is on 2llitres of oxygen requirement per day, which is a miracle, as she was admitted with just 4% functioning of lungs at Bhailal Amin hospital. “

Vadodara has witnessed and many Barodians have been a part of this movement, which will have no place in the books of history, but it has a special place in the heart of doctors , who were treating her to bring her back to life, the donors, who not only donated but prayed for the speedy recovery of her , the front line warriors of the hospital , who were eager to see Seema ‘s reunion with their twin daughters and Pooja Rathore , who proved to be an angel initiating the ‘Save Seema’ movement , as she stretched herself out of her comfort zone and connected with every probable donors, influencers without any stigma . It was not just Pooja, but there were many silent heros and heroines in this movement, who did their best to get the donations for the treatment . Every single pie of donation was blessing from unknown donors , who actually showered their blessings and goodwill along with money for the recovery of Seema.

One just wonders, how Seema will respond when she learns about the several hands and prayers that have given her second life.

The SAVE SEEMA battle is almost won, but this battle has united all classes of people irrespective of their religion, creed or caste. From a maid servant, to auto driver, from senior citizens to Sonu Sood foundation every one supported this movement , whether in terms of moral or financial support.