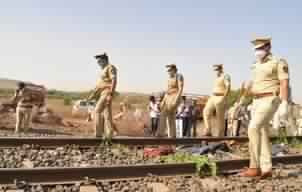 At least 14 migrant workers sleeping on rail tracks were crushed to death by a goods train in Aurangabad district of Maharashtra on Friday morning, police said.

Two other labourers were injured in the accident which took place at 5.15 am under the Karmad Police station jurisdiction, an official said.

The workers, who were walking to Bhusawal from Jalna in central Maharashtra along rail tracks, were returning to their home state Madhya Pradesh, an official at the Karmad police station told The India Post.

They were sleeping on rail tracks due to exhaustion when they were run over by the goods train coming from Jalna, around 40km from Karmad, he said.

“The labourers, working in a steel factory in Jalna, left for their home state on foot last night. They came till Karmad and slept off on the tracks as they were tired,” police officer Santosh Khetmalas said.

Fourteen workers lost their lives in the accident, while two others were injured, he said, adding three labourers who were also part of the group survived as they were sleeping some distance away from the rail tracks.

The migrant workers, rendered jobless due to the coronavirus-enforced lockdown and desperate to go to their native places, were walking along the rail tracks apparently to escape police attention.

A video clip from the scene of the tragedy shows the bodies of migrant workers lying on the tracks and nearby with their meagre personal belongings scattered around.

Prime Minister Narendra Modi expressed anguish over the death of 14 migrant workers in the train accident.

He said all possible assistance is being provided.

In a tweet, the prime minister said, “Extremely anguished by the loss of lives due to the rail accident in Aurangabad, Maharashtra. Have spoken to Railway Minister Shri Piyush Goyal and he is closely monitoring the situation”.

Maharashtra and Madhya Pradesh governments announced financial aid of Rs 10 lakh – Rs 5 lakh each – to families of the deceased.