An FIR has been lodged against 203 Congress leaders including former Congress President Rahul Gandhi and current General Secretary Priyanka Gandhi Vadra. The FIR was lodged at Ecotech Police Station in Greater Noida for violating section 144 of the CrPC that has been imposed in the district in view of the coronavirus pandemic. Sections 332 (Voluntarily causing hurt to deter public servant from his duty),353 (Assault or criminal force to deter public servant from discharge of his duty), 427 (Mischief causing damage to the amount of fifty rupees),323 (voluntarily causing hurt) ,354 (b) (Assault or use of criminal force to woman with intent to disrobe), 147 (Punishment for rioting) 148 (Rioting, armed with deadly weapon) of the Indian Penal Code have been imposed on the accused.

The FIR has named 153 people while 50 of the accused are unknown.

According to a statement issued by the police, over 200 Congress workers along with Rahul Gandhi and Priyanka Gandhi Vadra were repeatedly asked to stop while on their way to Hathras from Delhi on the Delhi-Noida-Delhi highway. “The huge convoy consisted of over approximately 50 cars. The police requested them to halt as Section 144 is imposed in Gautam Buddh Nagar in view of coronavirus pandemic which prohibits any sort of congregation of people. However, the party workers did not pay heed and started moving towards the Yamuna Expressway, violating traffic rules and causing disruption to traffic. Two vehicles of the convoy also got involved in an accident,” said the police statement.

Further, police said that the convoy’s movement resulted in a traffic jam on both sides of the expressway wherein some ambulances were stuck as well. “Even after repeated requests by police officers, Rahul Gandhi and Priyanka Gandhi proceeded in violation of the rules. At the zero point of Yamuna Expressway, as the police stopped the convoy, Rahul Gandhi and Priyanka Gandhi decided to proceed on foot. Authorities requested Rahul Gandhi that there is a risk of loss of life and property along with traffic due to you and your workers. On this too, Rahul Gandhi and his party people did not agree and when an attempt was made by the police to stop, the police officers were pushed.”

The police further said that the party workers and leaders were told that since Section 144 is imposed, it is a punishable offence to be on the expressway in such large numbers, that too without following any social distancing.

“Many people who did not have their masks were stopped but they forcibly continued to move. We also informed the leaders that the Hathras District Magistrate has requested that no political people should be allowed to come to the district as it would worsen the law and order situation. However, no one paid heed to police requests”.

The police said that after Rahul Gandhi and Priyanka Gandhi were arrested by the police for violations, 50 activists of Congress damaged a police car. 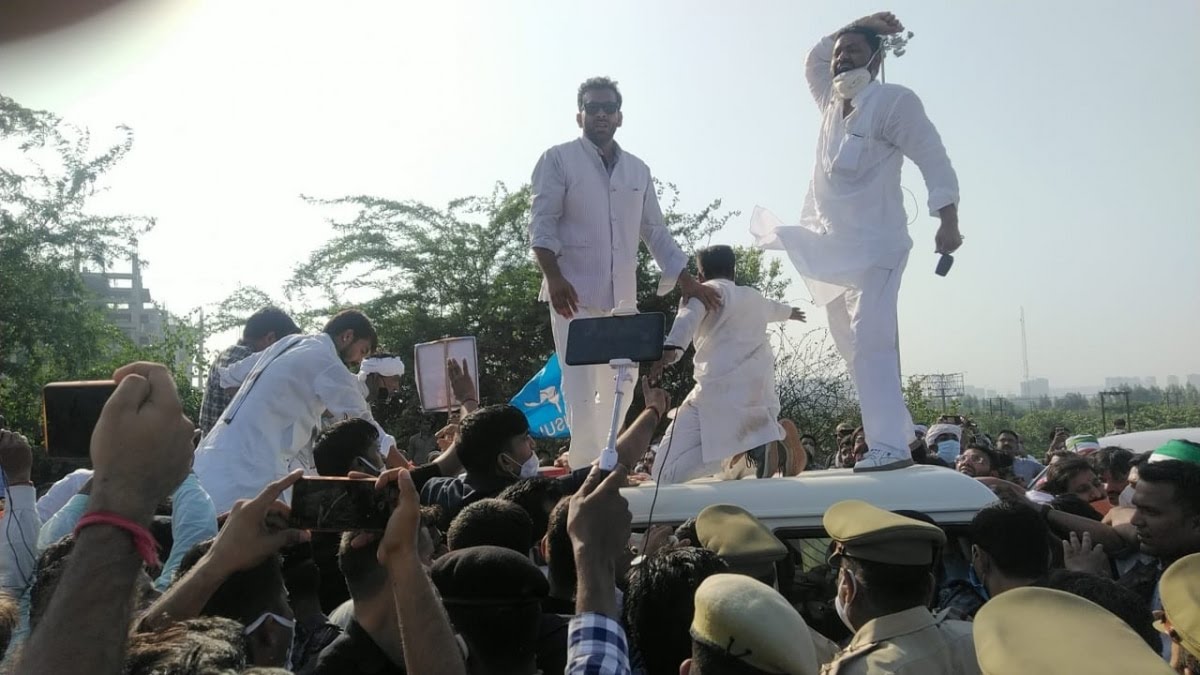 Photo of the Congress activists shared by Noida Police.

“During this, some women police officers also got hurt and the uniform of one of the women sub-inspectors was torn by the protestors,” said the police statement.