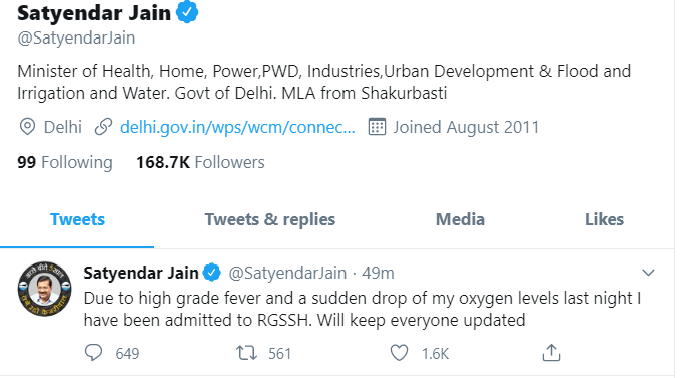 Delhi’s Health Minister Satyendar Jain was admitted to Rajiv Gandhi Super Speciality Hospital on Monday (June 15) night after he complained of high fever and difficulty in breathing. According to doctors, Jain’s oxygen levels had dipped.

All these are symptoms of coronavirus and that’s why Jain’s sample was taken for the COVID-19 test after he was admitted to the hospital. The test result will come on Tuesday (June 16). It is learnt that the AAP leader is still on oxygen support.

Taking to Twitter, Satyendar Jain wrote, “Due to high grade fever and a sudden drop of my oxygen levels last night I have been admitted to RGSSH. Will keep everyone updated.”

He had also attended the meeting called by Union Minister Amit Shah on Sunday (June 14) along with Chief Minister Arvind Kejriwal. Jain and Kejriwal had travelled in the latter’s car together after the meeting.

Delhi CM Kejriwal has wished speedy recovery to his cabinet colleague and said that Jain worked for the welfare of the people without thinking about his well-being.