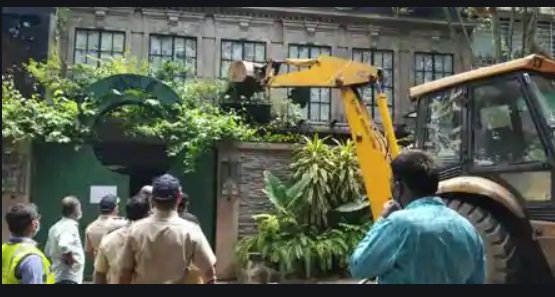 The latest development in the dramatic face-off between Bollywood actress Kangana Ranaut and Maharashtra government over a tweet by the actress comparing Mumbai to PoK, resulted in the Brihanmumbai Municipal Corporation (BMC) demolishing her Pali Hill office on Wednesday morning.

The Bombay High Court has meanwhile, granted a stay on the demolition of Kangana Ranaut office, asking the BMC to file reply on actor’s petition.

Earlier in the day, the BMC officials landed at her Mumbai office, fully prepared to raze down the ‘illegal construction’, while the actress boarded a flight for Mumbai from Chandigarh. Meanwhile, her lawyer Rizwan Siddiqui appeared before the Bombay High Court through video conferencing seeking a stay order on the demolition.

Kangana Ranaut approached the Bombay High Court on Wednesday challenging the notice issued by the Mumbai civic body for ‘illegal construction’ at her bungalow, and sought a stay on the demolition process.

“We filed a petition this morning seeking an urgent hearing. We have sought a stay on the demolition process by way of interim relief,” Ranaut’s advocate Rizwan Siddiqui had told PTI.

All through her journey from Manali to Mumbai via Chandigarh, the actress remained active on social media and kept tweeting about the BMC officials bringing down her property.

The demolition notice was issued by BMC on Tuesday under section 351 of the MMC Act and the civic body has given 24 hours to Kangana to respond to the notice. On Tuesday, Kangana took to her social media handles and shared the copy of the reply by her lawyer Rizwan Siddiqui to the BMC notice on the demolition of her property in Mumbai.

Kangana got into trouble after her controversial Pakistan Occupied Kashmir (Pok) remark on Twitter against Shiv Sena MP Sanjay Raut’s threat. She tweeted accusing Raut threatening the actress to not return to Mumbai if she has no faith in the police.

The actress has been naming and shaming several big Bollywood celebrities for fanning nepotism and recently in the drug conspiracy related to Sushant Singh Rajput case.

On Monday, Ministry of Home Affairs (MHA) granted Y category security to Kangana. Seven policemen will take care of Kangana’s security. Officials of CRPF, Intelligence Bureau and Himachal Pradesh Police arrived at Kangana’s Manali home on Tuesday to chalk out plans of the actress’ security ahead of her visit to Mumbai on September 9.