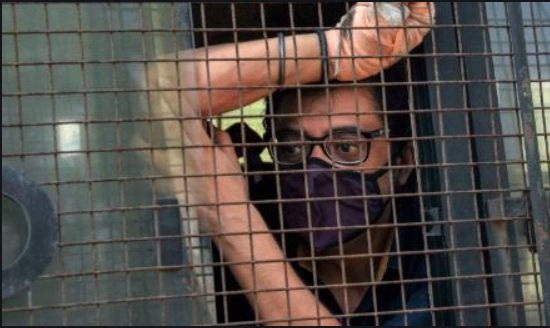 Republic TV editor-in-chief Arnab Goswami was shifted to Taloja Central Prison in Navi Mumbai on Sunday morning from a makeshift Covid-19 quarantine centre in Alibaug for allegedly using a cellphone.

Goswami, who was arrested on November 4 for allegedly driving interior designer Anvay Naik to take his own life in Alibaug in 2018, was sent to the quarantine centre in a municipal school run by the local prison authorities. The police had seized his cellphone after placing him under arrest.

Inspector Jamil Shaikh of the Raigad district police’s Local Crime Branch said that Goswami had used a mobile phone inside the quarantine centre. “He used the phone on Friday to provide updates on his situation on social media. We came to know about it on Saturday. We are conducting an inquiry to find whose phone he used,” he added.

Arnab remains in judicial custody ahead of a decision on his interim bail plea, which is set to be announced by the Bombay High Court around 3 pm on Monday.

A Republic TV video showed Goswami alleging that he was assaulted at the quarantine centre. “I am not allowed to speak to my lawyers, my life is under threat. I was pushed and assaulted this morning. At 6 o’clock, they woke me up, they said they will not let me speak to the lawyers. Please tell the people of the country, my life is under threat. My life is in danger, please tell the courts to help me. Tell the court that I have been beaten in jail.”