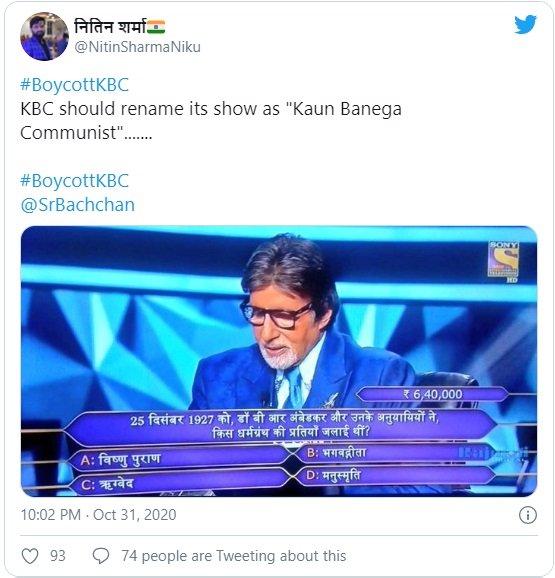 A section of the internet is furious with megastar Amitabh Bachchan and the makers of his super successful game show ‘Kaun Banega Crorepati’ over a question asked by him in last week’s Karamveer special episode.

The question – on Manusmriti – was posed before social activist Bezwada Wilson and actor Anup Soni and it has not gone down well with the netizens. Some of the people have accused ‘KBC 12’ of “hurting Hindu sentiments”. An FIR has also filed in Lucknow against Amitabh Bachchan and ‘KBC 12’ makers.

For a question worth Rs 6,40,000, Amitabh Bachchan asked Bezwada Wilson and Anup Soni:

On 25 December 1927, Dr BR Ambedkar and his followers burned copies of which scripture?

The answer was Manusmriti, and the duo got it right.

While announcing that the right answer is Manusmriti, Big B explained to them that Dr BR Ambedkar condemned the ancient Hindu text Manusmriti and also burned copies of it.

This explanation seems to have angered the netizens and some social media users also called for the show’s boycott.

“#BoycottKBC —  KBC should rename its show as ‘Kaun Banega Communist’,” read a tweet. Another user wrote, “This is out of desperation to show BR Ambedkar as anti-Hindu which he was not. They want to divide Hindu community on the basis of caste. They are stripping themselves through these kind Propaganda. #BoycottKBC.”