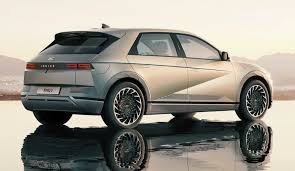 South Korean auto giant Hyundai Motor on Tuesday unveiled the IONIQ 5, the first model embedded with its own electric vehicle (EV) platform, as it strives to morph into a future mobility solutions provider.

Hyundai said that it will launch the IONIQ 5 in Europe next month, in Korea in the second quarter and in the US and other markets later this year.

“The production of the IONIQ 5 begins in Hyundai’s Ulsan plant next month. The company aims to sell 70,000 units globally this year, including 26,500 units in domestic market, and 100,000 units next year,” Hyundai Motor President and Chief Executive Chang Jae-hoon said in an online press conference.

Among other features, the E-GMP’s flat battery and long wheelbase allow for a more spacious and customisable interior for passengers and cargo, unlike crossovers with internal combustion engines and conventional steer-by-wire systems, the CEO said.