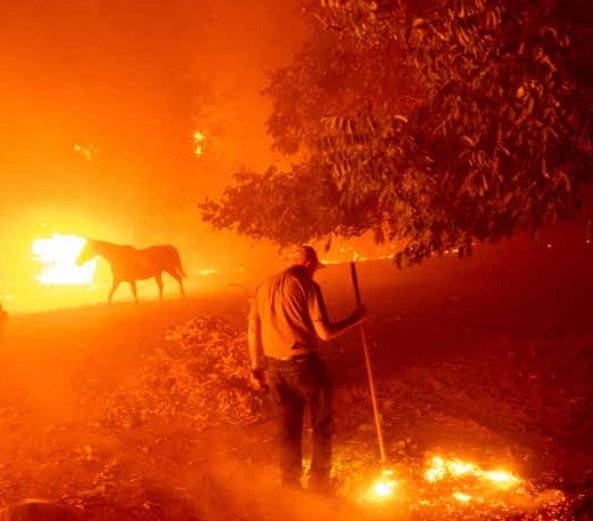 US President Donald Trump has declared that the massive wildfires wreaking havoc across California, which have already burnt over 1 million acres of land and forced the evacuation of tens of thousands of residents, were a major disaster and has released federal aid.

Currently, more than 14,000 firefighters were battling to contain the blazes which were caused by over 12,000 dry lightning strikes last week during a historic heat wave in which temperatures in the Death Valley National Park reached the highest since 1931, the BBC reported.

On Saturday, CalFire, the state’s fire department, said that people should brace for more lightning till Tuesday and make further evacuation plans.

According to local authorities, at least six deaths were linked to the wildfires that are believed to be the “largest ever”.

Most of the destruction has been caused by three large fire complexes in mountainous and wooded rural areas.

On Saturday, California Governor Gavin Newsom said the S.C.U. Lightening Complex group of about 20 fires south and east of San Francisco is the third-largest in the state`s history, the BBC reported.

Video tweeted by the Governor showed burnt tree stumps against the reddened fumes-filled sky and plumes of white smoke rising from ash-laden ground.

Although California is used to wildfire, Newsom called the fires unlike anything the state had seen before.

“If you don’t believe in climate change, come to California,” the BBC quoted the Governor as saying.

An evacuation order on Saturday extended to thousands of people in the Bay area near San Jose and warned others to be prepared to abandon their homes at short notice.

It is about 10 per cent contained.

The largest wildfire, called the L.N.U. Lightening complex, is in the prominent wine-growing areas of Napa and Sonoma north of San Francisco and is just 15 per cent contained, CalFire said on Saturday.

Further south in Santa Cruz county, 115 homes have been destroyed and some residents evacuated.

California is also facing electricity shortages, which have caused rolling blackouts for thousands of customers.

Officials have appealed for residents to use less power or risk further cuts.

Satellite images show smoke blanketing nearly all of California, as well most of Nevada and southern Idaho.

Officials have advised people to remain indoors due to the poor air quality outside.

The largest fire recorded in the state was the Mendocino Complex blaze in 2018, according to Cal Fire.