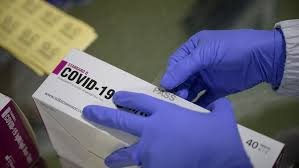 Twelve new cases were reported from Ganjam district, three were detected in Mayurbhanj and one each in Bhadrak and Sundergarh district, it said.

The total number of infected people rose to 83 in Ganjam district. The number of cases in Bhadrak stood at 25 and total 13 cases were detected in Sundergarh.

At present, there are 222 active cases in the state and 63 people have recovered. Two people from Bhubaneswar have succumbed to the disease, an official said.

There are currently 298 people in hospital isolation in the state, he said.

The state health department had on Friday conducted 3,348 tests for COVID-19, he said, adding that Odisha has so far tested 56,322 samples.

As per an analysis by the department, 240 of the state’s total 287 cases have been reported from five districts. Ganjam reported 83 cases, Jajpur 55, Khurda 50, Balasore 27 and Bhadrak 25.

In a span of eight days, Ganjam has reported 83 cases. The majority of the cases reported from Ganjam were those of Surat returnees, the official said.

Tribal-dominated Sundergarh district reported 13 cases, while eight cases were detected in coastal Kendrapara, followed by the northern districts of Mayurbhanj at seven and Jagatsinghpur at five.

Two cases each have been reported in Cuttack, Jharsuguda, Bolangir, Keonjhar and Kalahandi, and one each in Puri, Dhenkanal, Deogarh and Koraput districts.