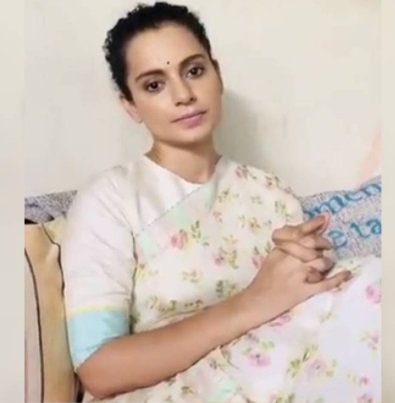 The Bombay High Court on Tuesday permitted actor Kangana Ranaut to add Shiv Sena’s chief spokesperson Sanjay Raut as a party in her plea against the Brihanmumbai Municipal Corporation over the demolition of a part of her bungalow in Mumbai.

A bench of Justices S J Kathawalla and R I Chagla also allowed Ranaut to add Brihanmumbai Municipal Corporation (BMC) H-ward’s designated officer Bhagyavant Late as a party to let him respond to any personal allegations that the actress makes against him.

Ranaut filed a plea in the high court on September 9, seeking that the court declare the demolition of a part of her bungalow in Pali Hill area here by the BMC as “illegal”.

She subsequently amended her plea to demand Rs two crore as damages from the civic body and its officials for the demolition.

While hearing her amended plea on Tuesday, the high court noted that Ranaut’s counsel, senior advocate Birendra Saraf, had submitted a DVD containing a speech in which Sena leader Raut allegedly made a comment threatening the actress.

Justice Kathawalla pointed out that if the actress was going to rely on the DVD, then Raut will have to be given a chance to respond.

“What if he (Raut) says that he has not made these statements or that this DVD is fabricated? You have to give him an opportunity to respond,” the bench said.

Saraf then said he also wanted to make Bhagyavant Late a party in the plea as the civic official had issued all communications related to the illegal construction notice and demolition.

Reacting to the development, Raut said he will not get deterred by the move to make him a party in Ranaut’s plea.

“Case by an actress in Hon. High Court is abt the demolition of illegal structure by BMC which is an independent body & Demand is 2 mk RS MP Sanjay Raut a party! From Babri case 2 standing fr Marathi pride, I have faced several cases! This wouldn’t deter me from fighting fr d pride of my city & my Maharashtra,” the Sena MP tweeted on Tuesday night.

On September 9, the BMC demolished a part of Ranaut’s bungalow, alleging she had made illegal structural changes and repairs to the structure breaching the civic body’s sanction plan.
The bench led by Justice Kathawalla on the same day stayed the demolition, saying it appeared to be malafide.

Ranaut filed a rejoinder affidavit in the high court on Monday, stating that she didn’t make any structural changes or repairs illegally.

She also denied the BMC’s allegation that her demand for the demolition to be declared illegal and that she be paid Rs 2 crore in damage by the civic body was an abuse of the process of law.

The actress alleged that the BMC had acted out of personal vendetta against her after she made some comments against the Shiv Sena-led government in Maharashtra.

In her rejoinder affidavit, she claimed that on the day she had been served a notice by the BMC on the alleged illegal construction, several other property owners in the vicinity of her property, including fashion designer Manish Malhotra, were served similar notices.

While Malhotra and the others were granted seven days to respond, she was given just 24 hours.

Her reply was rejected and the demolition carried out.

On Tuesday, the bench said the BMC must clarify when Malhotra and others named in Ranaut’s affidavit were served with the illegal construction notices, and if any of those structures have been demolished yet.

The bench also said on the next date, both parties will have to argue on the amount of time that should have been given to Ranaut to respond to the BMC’s demolition notice issued under section 354 (A) of the Municipal Corporation Act.

The court also directed the BMC to file its response to Ranaut’s rejoinder affidavit by Thursday.

The direction came after BMC’s lawyer, senior counsel Aspi Chinoy, said Ranaut had made some new statements in her affidavit.

He said while earlier Ranaut maintained that the alleged structural changes had been made some years ago in consonance with the BMC’s sanction plan, in her affidavit she had outrightly denied having made any structural changes to her bungalow.

Ranaut in her rejoinder affidavit said, “I deny that I have carried out unlawful additions and alterations as alleged or at all.”

Last week, the BMC, through its counsel Joel Carlos, filed an affidavit responding to Ranaut’s petition.

It said the actress had made major structural changes to the building without the civic body’s approvals. Therefore, its officials were merely following the rule of law in demolishing these alterations on September 9.

The civic body had urged the high court to dismiss Ranaut’s plea and impose a cost upon her for filing the petition, which it said was an “abuse” of the process of law.

The high court is likely to further hear the matter on Wednesday.