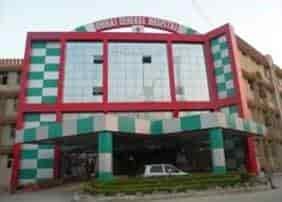 The management of Dhiraj hospital in Pipariya in Waghodia taluka of Vadodara has sought an extension of ten days from the district administration to put forth their side in the ongoing inquiry into the alleged mismatch of the number of free beds occupied by Covid-19 patients in the hospital in May.

The hospital, which is facing a probe after a team of doctors found a difference of 120 patients in the actual admissions and the claimed “occupied beds” by the hospital during an inspection on May 13, was supposed to appear before the probe team on Friday with its explanation and records.

District Development Officer (DDO) Kiran Zaveri told that a detailed inquiry was initiated about a week ago with several top health officials of the district in the team to conclude the reason behind the discrepancy of Covid19 figures.

Dhiraj hospital, which is affiliated to Sumandeep Vidyapeeth, has a facility of 600 Covid-19 beds, out of which 400 beds had been reserved for free government patients during the ongoing second wave of the pandemic, vide a Memorandum of Understanding (MoU) with the district administration.

Zaveri said, “The hospital has asked for 10 days extension to present the facts. Our inquiry is on and a team is working as per the guidance of the officials. We had an MoU for Covid-19 patients to be admitted under the free government scheme. But on May 13, the hospital claimed it had 469 admissions, which sounded too exaggerated. When a team of doctors, including the Chief District Health Officer (CDHO) visited the hospital and physically counted the patients, they found 246 patients admitted.”

“The hospital management claimed that there was a counting mistake so another round of counting was held with officials in PPE kits making rounds of the wards. This time we found 234 patients. Within one and a half hours, ten patients had taken discharge and two had passed away. We immediately decided to put their MoU on hold and stopped sending the free patients to the hospital. We also asked them to continue treating those who were already admitted but to stop taking new admissions from May 15 onwards,” the DDO added.

Zaveri added that the team is also probing the use of remdesivir injections that were provided to the hospital during the period and has sought details from the hospital.

“We have asked them to submit their record and patient files wherever Remdesivir has been used. The course that will the MoU will take will depend on the outcome of the probe. If they are found guilty the top officials will suggest the next action,” Zaveri said